Pumps like Ks of horizontal execution with the drive from the electric motor are intended for pumping of condensate at thermal power plants. Condensate of the fulfilled steam and steam turbines and heating pair of the heat exchanger has to have temperature no more than 90 °C, a hydrogen indicator rn from 6,8 to 9,2; concentration of firm particles more than 0,1 mm in size should not exceed 5 mg/l.

Features of a design and appointment:

The unit consists of the pump and the driving engine installed on the general base frame (plate) and connected by means of elastic vtulochno — the manual coupling for pumps 1Kc32, 1ks50 and 1ks80 and the elastic coupling with an asterisk for the pump 1Kc20.
The rotor of the pump consists of a shaft, driving wheels, the screw, an unloading drum (in pumps 1Kc20), plugs, details of consolidation and fasteners. Between a wheel of the last step and a drum the gap which is the compensator of temperature tension when heating driving wheels the pumped - over condensate is provided. As support of a rotor serve spherical bearings. The rotor of the pump 1Kc20 is unloaded from axial forces by means of a drum. In pumps 1Kc50,1Kc32 and 1ks80 the unloaded driving wheels are used. Residual axial forces are perceived by the bearing.
The direction of rotation for pumps 1ks20 - right (clockwise), for pumps 1Kc50, 1ks32 and 1ks80 - left (counterclockwise) if to take a detached view the engine.
Trailer consolidations of the pump - stuffing. Between rings of stuffing the epiploon ring (a hydrolock ring) to which is established to exclude a possibility of a suction of air, and also for cooling condensate or chemically desalinated water is brought.
Pumps are used for pumping of water condensate of the fulfilled steam in steam turbines, condensate of the heating steam from heatexchange devices and fresh water. The soaking - up branch pipe is in the case of absorption and is directed from a horizontal axis of the pump to the right. The delivery branch pipe is in the case of forcing and is directed vertically up. Basic paws are flowed from below to cases of absorption and forcing. The fixed provision of an axis of a shaft is provided with a rigid shtiftovka of paws of the case of forcing and a mobile shtiftovka of paws of the case of absorption. Tightness of joints of sections, cases of absorption, the case of the screw and the case of forcing is provided with rings from heatresistant rubber 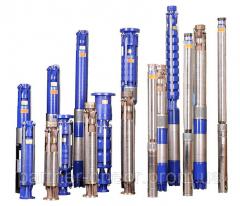 A pump for liquefied gas SKC
In stock
35000 UAH 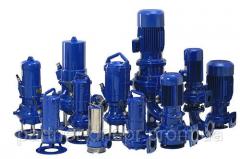